The Seventeen Solutions: Bold Ideas for Our American Future

Interview Highlights
On Diminishing Corporate Influence in Politics
It’s so easy to turn it around. I mean, when you say to yourself, “Where should our country be going? Where should our community be going? How should workers be treated? How should consumers be treated? How should we get clean elections?” You don’t think you have a majority of people [supporting that]? You may have liberals and conservatives on that. And so the key issue is like, it’s a principle of physics. Where do you have the greatest leverage to turn the government around and put Wall Street in an accountable position and make these corporations our servants, not our masters? Congress. 535 men and women. And they all want your votes. But there is nothing organized out there, except a few single-interest groups.

On How Bird Watchers Can Save Government
Look, there are 15 million bird watchers. Some of them are incredibly intense and dedicated. Up in the morning in the marshes, regardless of the weather, with all the equipment. You know, connecting with one another. And they do connect with one another in terms of how many birds they watch. And, why can’t we have “Congress watchers?” It’s such a simple idea. There are people who work overtime on hobbies, complex hobbies, not just stamp collecting, coin collecting, matchbox collecting. There are people who every day do things far more difficult than organizing Congress watchdog groups in every congressional district, like raising children.

On Why You Shouldn’t Dismiss the Wealthy and How They Can Be Part of the Solution
The danger of a stereotype is 100 percent. You never want to stereotype. Even if you have an unfair stereotype. Do not stereotype 100 percent. There’s always the 1 or 2 percent. And justice needs money. A lot of these solutions could be accomplished very rapidly if thousands of organizers were fielded to work every day in congressional districts mobilizing people with a laser beam focus on their senators and representatives. You’d be surprised how fast the legislature and Congress will turn around.

Every empire in the history of the world has devoured its own people. Every empire when it’s fallen, has devoured itself. And we have so impoverished our country with the diversion of money for the empire, that we’ve got half of the people in this country who are really poor. Half of the people in this country. We are an advanced third world country. We’ve got modern computers. Modern military. Science. But the livelihood of more and more people is disgracefully shameful. And that’s what the 99 percent people were talking about.

On the Source of His Passion for Justice
I had a good choice of parents. As a child, you know, Michael, I couldn’t stand bullies. I actually got red and flushed in the face when a fourth grader would beat up a second grader. So, you grow up that way. And, I wanted to be a lawyer. To me a lawyer meant fighting for justice. It didn’t mean working in the Wall Street canyons for corporate behemoths like Goldman Sachs or Citigroup.

On Civic Engagement
You know the question I ask people? It’s a little facetious. You know, Congress affects you in every way. Good or bad. It can send your children off to war. It can allow companies to rip you off. It can raise your taxes. It can lower your taxes. It spends 22 percent of your income. I say, “Do you spend more time looking at the mirror in a period of a year? Or do you spend more time looking at your congress?”

Attacking the US middle class

Obama To The Working People – ‘Screw You’ 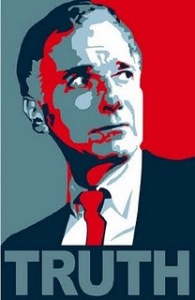 Ralph Nader ran for President of the United States on the Green Party ticket in 1996 and 2000 and as an independent in 2004 and 2008. He is the author of several books, including “Unsafe at Any Speed,” an indictment of the auto industry published in 1965. As a consumer advocate he has spoken out on a variety of issues, including health care, food safety, environmental pollution, worker rights, tax reform, civil rights, and corporate influence. 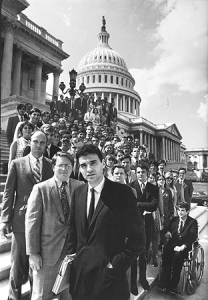 If sincere, a portion of these funds, from any of the families, should be given and set aside for civics education;  for both  high school and adult education in the US.

I’d like to suggest this book as part of a broader text.

“When we were youngsters, our father would ask us provocative questions. One day he asked, ‘What is the most powerful, event-producing force in the world?’ We guessed and guessed.

What? ‘Yes,’ he said, ‘apathy, because huge numbers of apathetic citizens, or victims, allow bad guys to create all kinds of problems on the ground — from dictatorial regimes, to repressed economic conditions, to health and safety hazards, to corruption, to wars and so forth.’

Edmund Burke, the British conservative philosopher around the time of our country’s revolution, put it another way– ‘All that is necessary for evil to prevail is for good men to do nothing.'”

Published in 1776, Common Sense challenged the authority of the British government and the royal monarchy. The plain language that Paine used spoke to the common people of America and was the first work to openly ask for independence from Great Britain.

"no doubt about it that nut's a genius"
Create a free website or blog at WordPress.com.